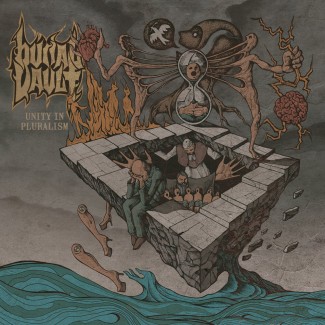 After unveiling our record „Ekpyrosis (Periodic Destruction)“ in 2012 and our concept album “Incendium” in 2013, we are proud to announce that our third full-length-album “Unity In Pluralism” will be released on the 1st of June 2015 in the UK and the rest of Europe and the 7th of July 2015 in North America via Apostasy Records INT..
This time, we varied some parameters of our sound to find a new and fresh approach. The album was recorded with producer Victor Santura (Dark Fortress, Tryptikon, Obscura o.a.) in his Woodshed Studio who worked out the perfect sound for the Songs. Costin Chioreanu (Arch Enemy, At The Gates o.a.) realized our vision of two separated artworks: an extensive and surrealistic painting (“pluralism”) and a simple binder to symbolize “unity”. Today we unleash the “pluralism”.
We are really looking forward to present more news very soon!
Pre-order the album now in the Apostasy.de-Shop.